Pork ribs are a staple of traditional BBQ – always have been and always will be. There are many variations of pork rib, starting with the cut itself before moving into the cooking method – some people prefer a dry rub, some a wet rub, some like to sauce the rib, and some do not. For the purpose of this article, we’re going to be looking at what is known as Baby Back, Spare, and St Louis ribs as these are what are used in competition. Here are some tips to help you Perfect Your Pork Ribs. 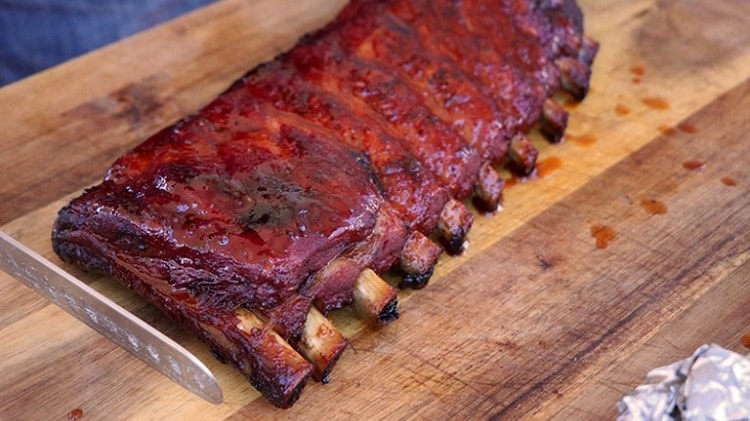 1. Perfect your Pork Ribs – Why are Pork Ribs tricky?

When we’re talking about smoking ribs, we’re essentially talking about the intercostal meat from between the bones and the first layer of meat covering bones. These muscles, whilst not the largest muscles on an animal, are some of the toughest parts of the animal due to the fact that they are constantly working – the animal uses these muscles to breath, the same as we do. As a result, this meat can be quite tough which is why ribs need to be cooked slowly.

Secondly, they are tricky, particularly in Australia as they are often difficult to find. I’ve covered all the reasons for this in an earlier article, but to summarise, Australian butchers are taught a different way to butcher an animal to our American brothers and sisters and so getting ‘American style’ ribs can be tricky. As a result, the knowledge pool on HOW to actually cook them is comparatively low as we simply haven’t as much experience with them.

Finally, ribs are notoriously easy to either over or under-shoot. I’ve taken a method to a comp which has worked perfectly at home with ribs from the same supplier, and wildly undershot at one comp only to wildly overshoot at the next. But more about cooking methods later…

We’ve already discussed above that they can be difficult to find in Australia. One trick is to ask your butcher for a ‘Bone-In Pork Belly’ and then trim it down yourself. Australia’s very own Jess Pryles has a great video on doing that over here. Be warned though – you will end up paying quite a bit for your pork ribs as you have to buy the entire piece of meat. The up-side is that you’ll have off-cuts in your freezer for other projects later on down the track! 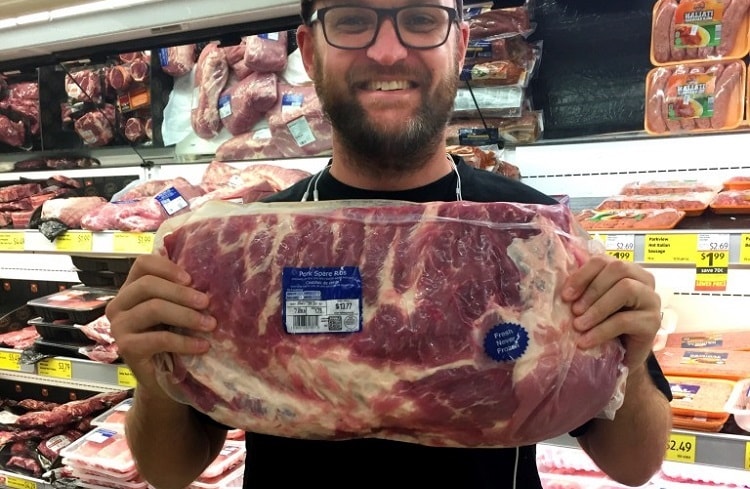 Also, I mentioned above, St Louis, Spare, or Baby Back ribs. The cooking method is essentially the same between all three. St Louis ribs are by far the most popular for competitions in Australia as they are more uniform, and look great in a presentation box thanks to their visually pleasing geometric lines.

Spare ribs extend past the end of the rib bone and will include the cartilage at the end. If you’re cooking at home, this is not a big deal, but if you’re cooking for comps then it’s best to avoid these if you can as judges don’t typically like having to spit out the pieces of cartilage.

Finally, there’s the Baby Back ribs. These come from higher up on the rib cage and have a more obvious curve to them. These are also common in competitions but some people can have trouble fitting them in a closed box due to their curves.

One important tip for competitors is to make sure that you get all your ribs from the same side of a pig. E.g. all your racks from the left side, or the right side. This way they will ‘lean’ the same way when you’re trying to put them into the box.

Finally, be wary of the ‘shiner’. These are ribs that have had most of the meat removed so that the only meat left is that from between the bones, and you can see the bones ‘shining’ through. This is done as Aussie butchers are trained to sacrifice the ribs for a better belly cut. This is why good ribs will cost you more in Australia – the butchers are having to sacrifice the belly.

We’ve already discussed a few things above that you can do to trim up your ribs. And a few more if you’re trimming them up for comps. 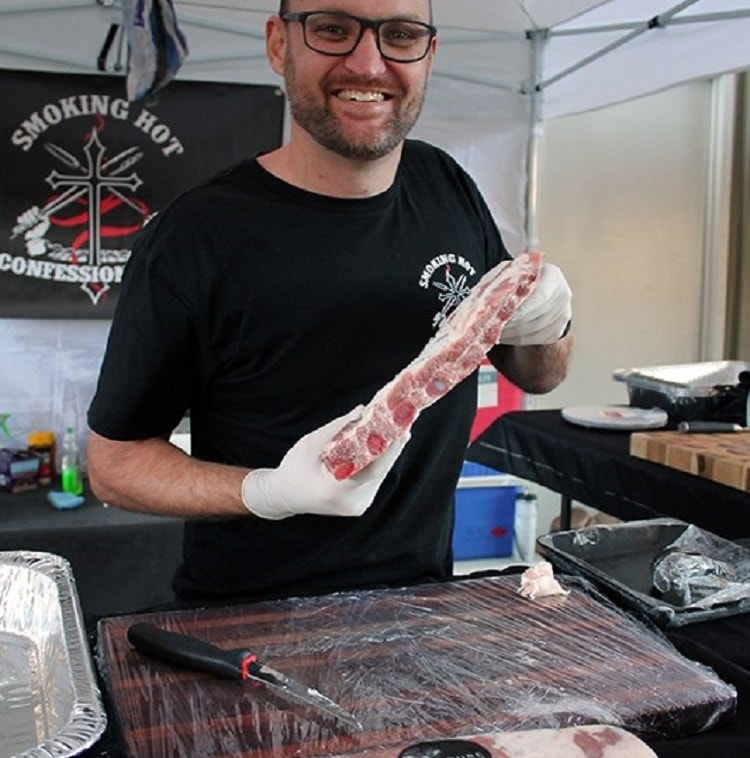 Firstly, turn the rack over so the bones are facing you. If there is still a little flap of meat on the back, trim it off and save it for later. You’ll also notice a thin, translucent film across the back of the bones. This is going to need to go too as if not, to avoid contracting and curling the rack fo ribs. Plus, it’s just not nice to eat later. Grab a butter knife and slide the blade between a bone and the film. Lever it up a little, being careful not to tear it. Once you can get a finger under the film, grab it between your thumb and forefinger using a piece of paper towel for grip, and pull it off. If you can get it off in one go, make a wish!

For the actual trimming, don’t overthink it too much. Just try to square up the rack and even it out. Try and eliminate any excessively thin pieces of meat – they’ll cook too fast and dry out.

A tip for comp cooks is to remove the top section of the ribs with the cartilage discussed earlier. Use your fingers to feel where the bones end and run your knife along that line. Put these ‘rib tips’ in the bag with the other off cuts and store them in the freezer for later.

This article ended up so big that I’ve had to stop at this point, breaking it into two parts. The next part will be released next week, so stay tuned!