How much does it cost to butcher a pig?

Cost of Butchering a Pig

Butchering a pig does not simply begin at the final process; as a matter of fact, you are going to have to start from A, and go down to Z if you want to do it yourself. This means you are going to begin with purchasing the piglet, and raising it, in order for you to eventually butcher the pig for the meat. So what does the process entail and how much is it going to cost you? The price is it will depend. But, this is a little breakdown of what you can expect, if you are a farmer, or considering the possibility of raising and butchering your own pig/meat.

Your costs are going to begin with purchasing a piglet; a 20 to 30 pound piglet can cost anywhere from $125 or higher. This will depend on where you live, as well as the weight and age when you purchase the piglet. In addition to this cost, you are also going to have to pay for the price of feed, which is not cheap. Again, depending on whether you purchase organic versus non-organic, purchase in heavy weight/bail, or by the pound, and other factors, will determine the cost of feed for your pig.

On the lower end of the spectrum, you are going to have to feed your pig around 800 pounds of feed as they are growing. With the average price of about $8.50 for a 50 pound bail, you can expect to spend around $140 for food. Again, this is on the lower end of the spectrum, assuming you are buying the cheaper food, and are purchasing it in bulk (Depending on where you live, where you purchase, the number of pigs you are raising, and other factors, the costs for this feed can of course increase). 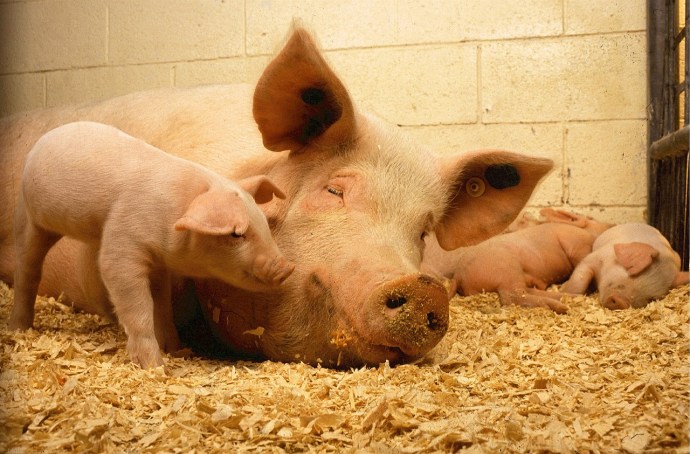 You need a place to keep your pigs, and this is going to be a pig pen. As with the previous examples, we are going to look at the lower cost/price end of the spectrum. So at a minimum, you can expect to spend about $120.

This is the area where you are going to feed, take care of, and raise your pigs. It is of course where they are going to sleep as well, so you do want to make an investment which is going to be sustainable for your pigs for the duration of growth, until you are ready to butcher the pigs. Along with the pig pen, electric fencing is a way to ensure their safety (basically to keep dangers out). A good electric fence can run about $200.

Although it is costly, it is the only way to ensure threats, or other animals won’t enter the pig pen, and areas where you are taking care of the pigs, as you are preparing them to be butchered. And, although it is an expense you don’t want to spend, it is worth it when you see the threats around, especially if you are raising other livestock, or live in an area where there are potential threats which might attack your pig pen.

For the cost of $610, you are going to be able to raise one piglet, which you are eventually going to butcher. Of course depending on the number of pigs you plan on purchasing and raising, this cost is going to increase. So it is important to account for these costs, as well as to keep in mind that these figures are on the lower end of the cost spectrum per piglet you are going to purchase and raise for slaughtering.

What you get (yielded output) 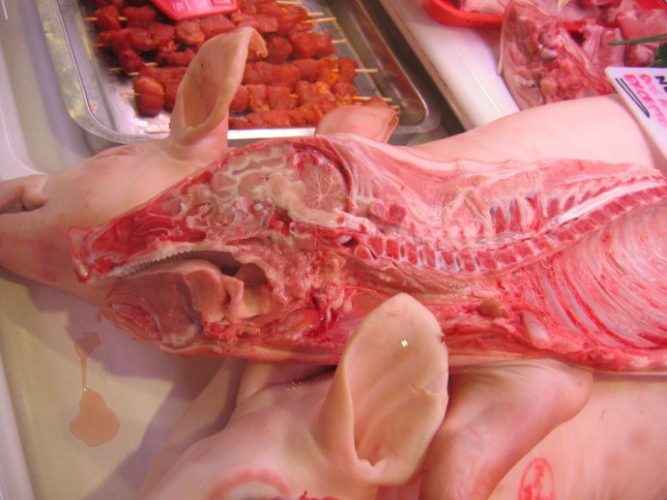 Whether you plan on packaging and freezing the meat for consumption, or turning around and selling it for a profit, you are going to get a yield of anywhere from 190 to 220/230 pounds of hanging meat per pig you grow and butcher.

Cost of butchering the meat yourself

This is going to yield a lower price per pound than if you were to send out the hanging meat to have butchered for you. It is important however to consider the fact that you will have to invest hundreds, if not thousands of dollars for butchering equipment.

So unless you are producing in high volumes and plan to resell for commercial profit, this is probably an unlikely scenario which most people are not going to be dealing with. If you do however have the butchering equipment, the price per pound you can expect to pay will range from $2.70 per pound, up to $4.80 per pound. The price differential will come from butchering techniques, the actual usable meat which will be butchered, and other factors which will take place in the process.

Of course this is an extremely low price and a great value. But, it is something that is going to require plenty of time, and it is going to require a rather large investment from you as a butcher. The simple fact that you have to purchase all butchering equipment in and of itself is going to be a major setback and will cost quite a bit of money.

If you plan on using the equipment in a commercial set up, butchering the meat on your own is not only very cost effective, it is also an efficient way to ensure you are going to have meat year round. Further, you know exactly what goes on in the process, so you know you are getting the cleanest butchered product.

Related Posts you may be looking for

Sending out the hanging meat for butchering

The more traditional route most individuals who are going to raise their own piglets for butchering will choose is to actually send the hanging meat out to be butchered. Not only is this true because most people don’t have the equipment, but also because it is a lengthy process, and it is one which can get quite messy if you do not know what you are doing, and do not know the proper process and steps to follow in butchering and processing the meat which is being butchered. 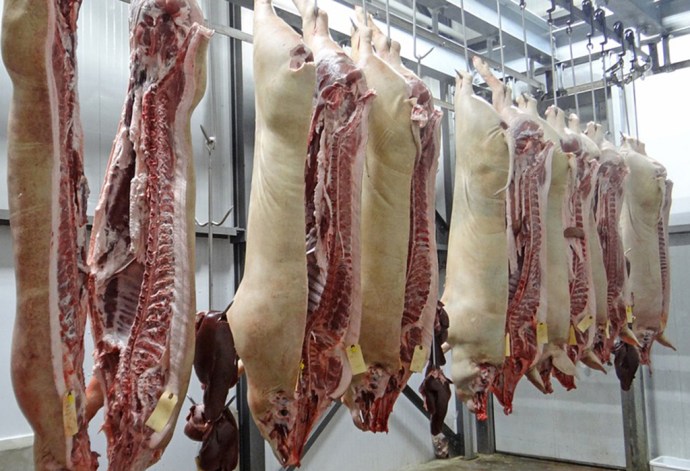 For those who are going to send out the hanging meat to be butchered, you can expect to pay anywhere from $60 to $100 for the farm kill. This is exactly what it sounds like; you are paying the butcher to pick up and to kill the pig you have raised for you. There are additional costs for this as well. You will also pay anywhere from $.60 to $1.00 for the wrap and cut fees.

This is for the butcher to actually cut the meat and to wrap it for resale to you. So depending on the hanging weight, you can be looking at an additional $200 plus the $60 to $100 kill fee, to have a butcher do the work for you. At this rate, you can expect to pay anywhere from $2.50 (if you used wholesale feed to raise your pig) onward to up to $2.81 per pound (for organic feed).

Although the price is going to be a little more than if you were to butcher the pig on your own, it is still a reasonable price per pound, in comparison to what you would pay at a local supermarket or butcher shop, if you weren’t raising the pig yourself.

It is important to note that the cost of raising pigs is not cheap, but these costs are not fixed in any way either. What might cost you $150 to purchase a pig in one area, may cost $100 in another, or might be $250 in another state. So you have to do your research when you are planning to raise piglets.

Further, depending on the number of pigs you are going to purchase and raise, the pig pen, electric fencing, bedding, and of course the cost of feed is also going to increase. So do keep in mind that the pricing for raising pigs is not one which is going to be the same from region to region, and it will differ based on how much space you have, and how many pigs you are going to be raising for butchering.

Costs will also vary depending on the kill pricing, as well as which butcher you choose to contact if you are not going to do the killing and butchering yourself. For those who plan on butchering for commercial resale, you can purchase equipment at discounted pricing from farm equipment wholesalers.

As is the case with anything, experience matters. The longer you do this work and learn the process, the easier it will get, and the more ways you will find to save on overhead and operational costs. But, it will take time to learn, and those who are new to the process will find a great learning curve ahead of them when they are getting started with the butchering of pigs, as well as other livestock they plan on raising.