How to Smoke a Pork Loin

A Smoked Pork Loin roast is generally not what you’d consider to be one of the best cuts of meat to be smoking. They’re usually quite lean and therefore don’t have the fat required to really make use of a low and slow cook. That doesn’t mean you can’t successfully smoke a pork loin though. Using our recipe and guide you can create some of the best tasting meat from a very underrated part of the hog. 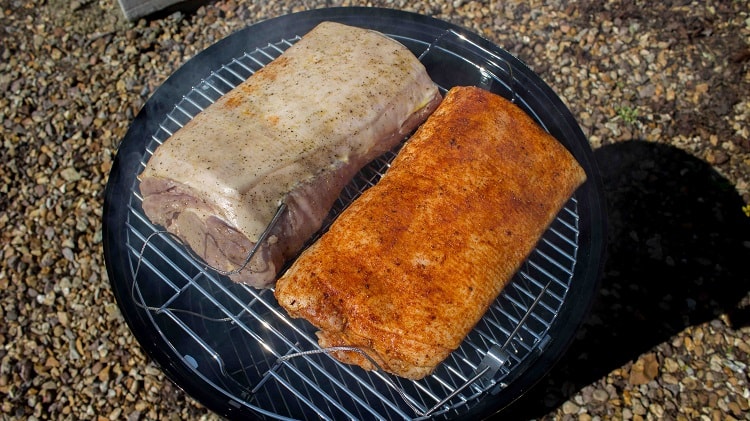 Choosing and Preparing the Pork Loin

The biggest decision you’ll have to make when choosing a pork loin is to have it with the bone in or without the bones. The bones are actually what you might know to be the loin back (baby back) ribs. For a more detailed look at ribs, check out our guide here. As you can imagine most people will separate the bones into classic ribs and cook the loin by itself. For our cook we bought the loin by itself for simplicity so will be doing a smoked boneless pork loin roast recipe. 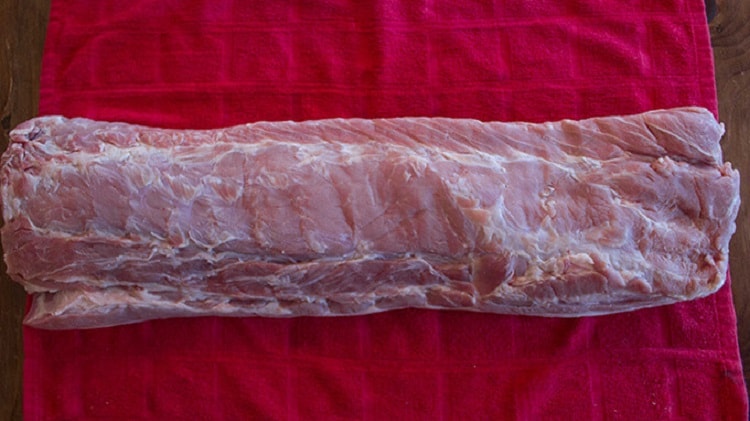 To prepare the loin we first washed it, dried it, then cut it to size. As we are using the 18 inch Weber Smokey Mountain we cut it down to size so it could fit. This left us with two similar sized loin pieces. 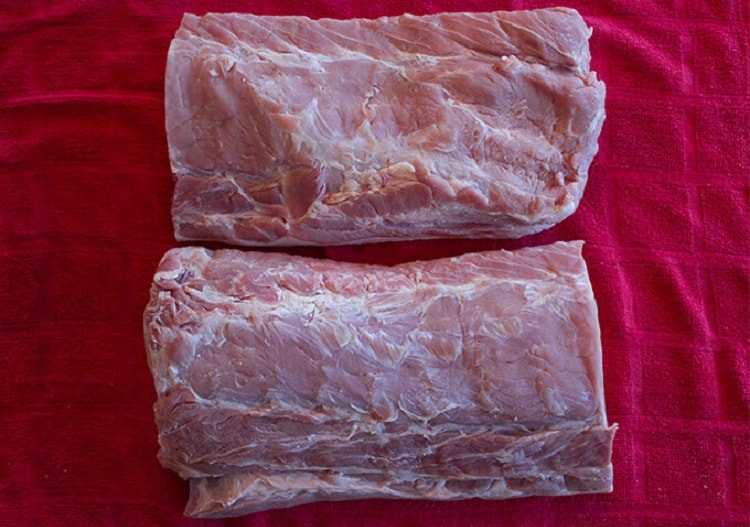 We decided to mix things up a little with each piece instead of using the same rub on both. To keep things super simple one of the loins was rubbed in simply salt, pepper, a splash of oil and a little bit of garlic powder. This piece of meat was to be used later as the base to many other recipes and was surprisingly tasty for such a simple coating. Try poking holes in the loin and adding cloves of garlic to really add some flavor.

The other one used a homemade rub that uses the following ingredients:

We mixed all of these together in a bowl and applied it to the other half of the loin. It used up about two thirds of the mixture. For a list of our recommended rubs check out our list of the top 10 BBQ rubs. 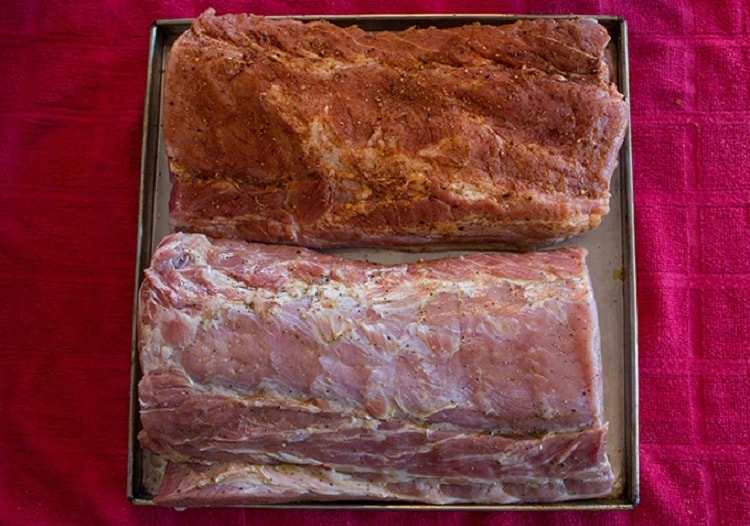 If you’re looking to try something a little different we’d recommend trying a marinade over a standard rub. There’s lots of interesting marinades on the web but we’d suggest looking at the turkey we smoked and using the rub/marinade we used for that. It gives a really sweet yet smoky flavor that works perfectly with lighter meats such as pork.

Preparing your Smoker for the Pork Loin

If you have an electric, gas or pellet smoker this should be easy enough. If, however, you’re like us and using a charcoal smoker then there’s a few more things to know.

There are several ways to cook a pork loin on a smoker. As it doesn’t require the usual low and slow efforts you have more choice.

We set the smoker to about 300°F. This is the faster way of cooking the boneless pork loin and it will be done in just a couple of hours. The internal temperature we’re looking to hit is 145°F.

As with all meat smoking we’d highly suggest using a digital meat thermometer to be able to give you a very accurate reading of the internal temperature. This not only helps you cook the meat safely, but will allow you to take it off the heat at just the right time to make it perfectly cooked.

Here’s a few posts we’ve written that will probably be useful:

The slower way is to set the smoker to about 250°F and smoke it for about an hour longer. Still taking it off the heat at around 140-145°F.

With a smoked pork loin you’ll probably have a nice layer of fat on the top. To really crisp this up you can either pan fry it before the smoke, smoke it at a minimum of 300°F or put it in the oven at a very high temperature (around 500°F) for around 5-8 minutes after it has reached 140°F to give it the crispy top. We chose to do the entire smoke at 300°F, which gave a slightly disappointing crisp to the fat, but it was still very tasty.

What is the best wood to smoke a pork loin with?

We think that a nice fruity, light wood works the best. We are big fans of apple wood as it works very well with pretty much anything. It’s especially good with white meats such as chicken and pork and gives pork a sweet, smoky flavor. When the charcoal of our WSM was nice and hot we put 3 chunks of apple wood into the smoker and left it.

We definitely recommend not to use strong wood like mesquite with pork, especially a pork loin or tenderloin as it will simply overpower it.

For a more detailed look at wood flavor combinations, check out our wood smoking guide. 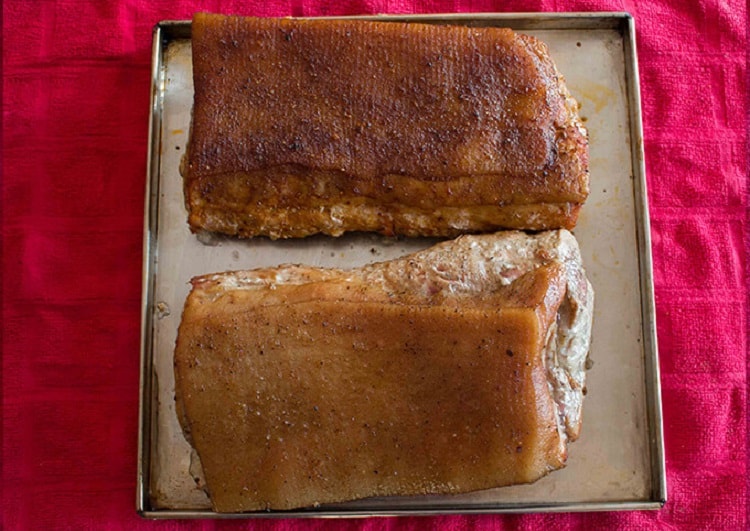 When the thermometer in the pork loin reads 140°F then its ready to be taken off. At this point you’ll have to leave it, ideally covered with just a cloth, for about 15 minutes.

I think they both came out very well considering that pork loin is definitely not traditionally suited to smoking. The smoke flavor came through very nicely and the meat was tender and incredibly tasty. Even the half that was just salt, pepper and garlic was delicious. The only disappointment was the slightly soft fat. This could easily have been remedied with a quick blast in the over but unfortunately we couldn’t do that this time. 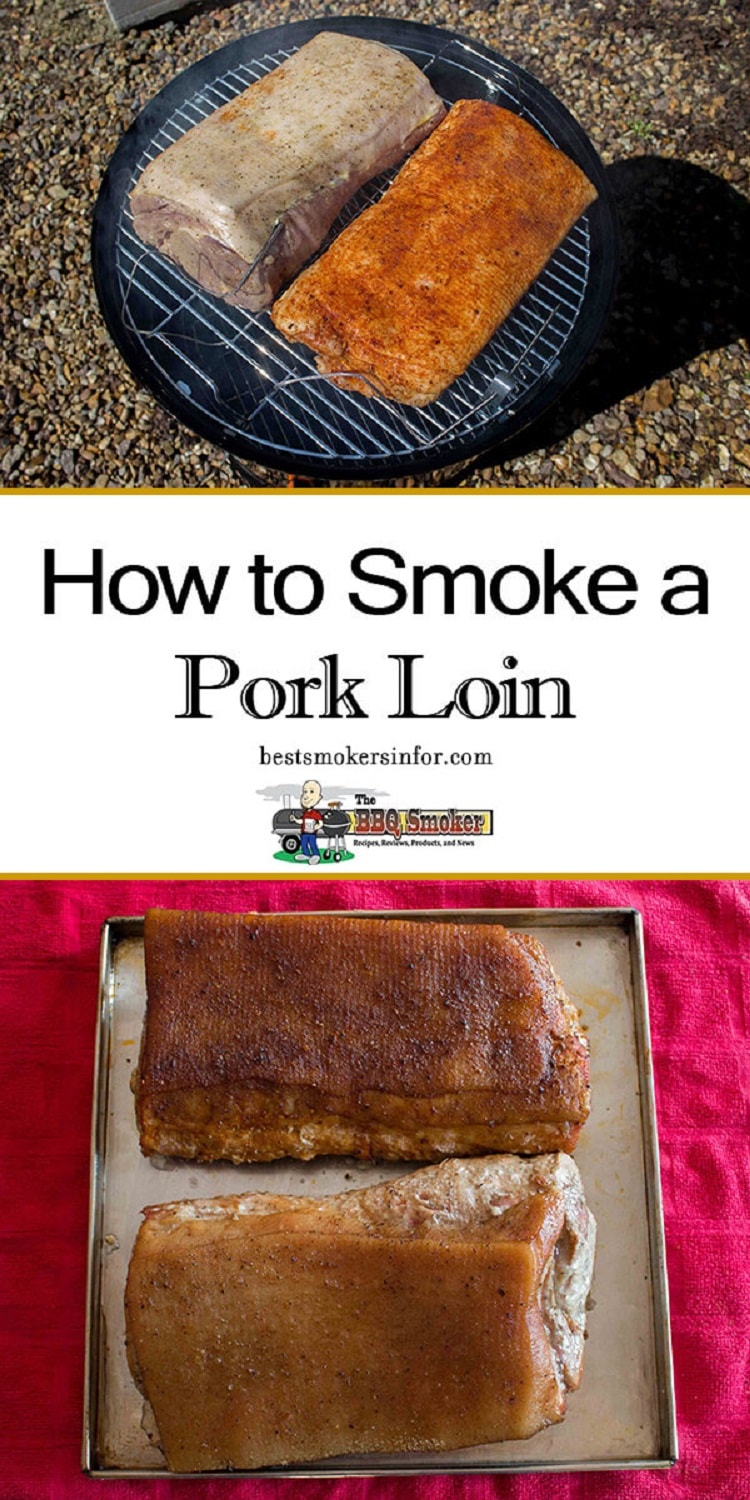