How To Grill Shrimp: Your Guide To Seafood Perfection

I don’t know about you, but I’ve always wondered how to grill shrimp. I love me some shrimp, but I don’t have the budget or the time to go out and have it in a restaurant as often as I want. But I wasn’t sure how to prepare the shrimp. And, more importantly, I couldn’t figure out how to keep the shrimp on the grill grates and out of the charcoal.

Fortunately, it turns out that learning how to grill shrimp isn’t all that hard. Once you have prepped the shrimp, grilling it is the easy part. What I learned when discovering how to grill shrimp, is that getting the right shrimp and preparing it properly is the most important part of shrimp grilling. Taking the time to fully prep your shrimp results in juicy, flavorful, delicious shrimp every time.

Quick Navigation
Start with the Right Shrimp
How Do I Prep the Shrimp?
Line Them Up!
Can I Substitute Precooked Shrimp for Fresh?
How to Grill Shrimp That Tastes Great
Other Grilling Methods
Anchors Away, Shrimp Lovers!

Start with the Right Shrimp 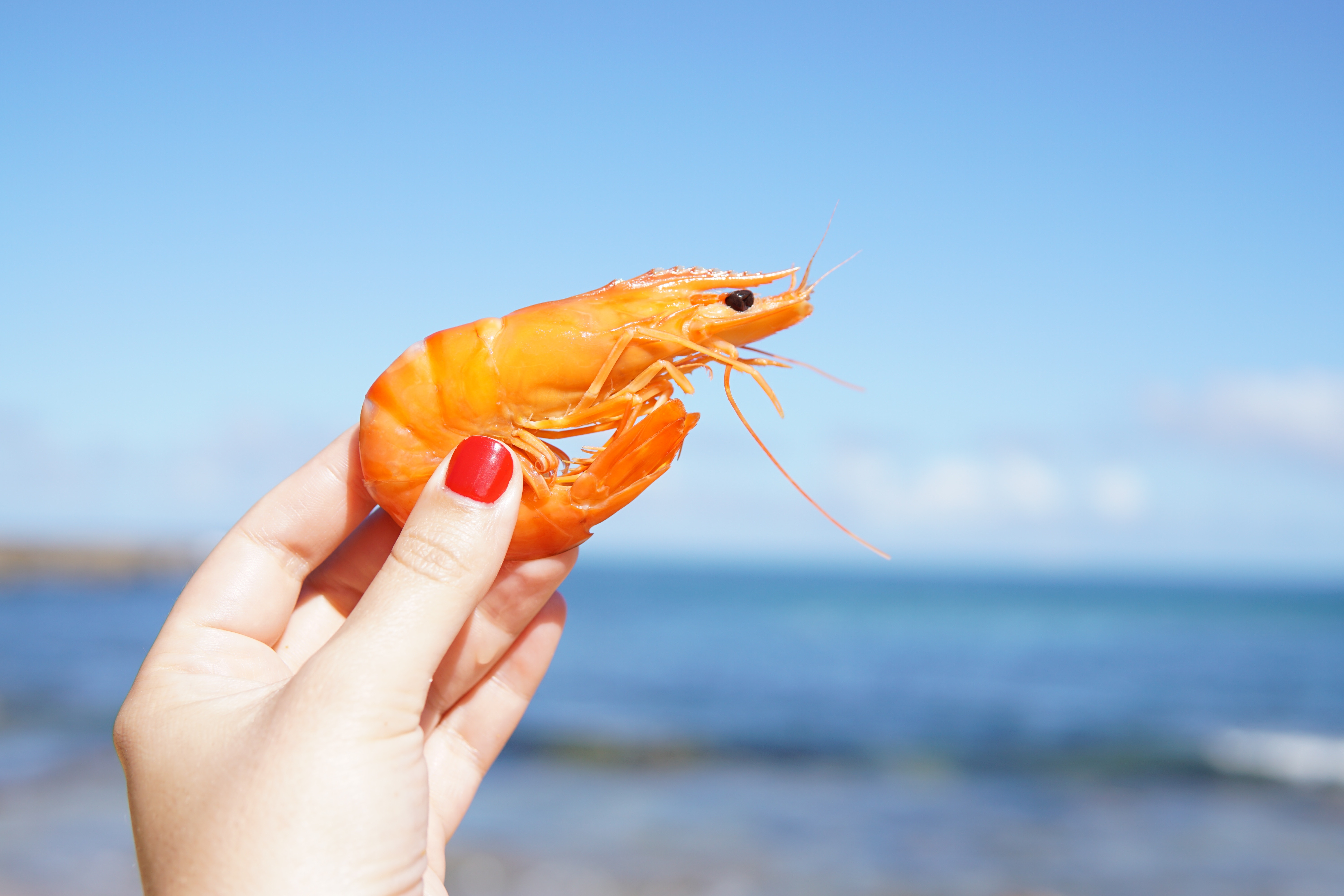 Shrimp come in different sizes: extra large, jumbo, extra jumbo, and colossal. While there is no difference in how these shrimp taste, there is a difference in how to grill the different shrimp sizes. Most grilling pros recommend that you use the larger size shrimp when grilling. The larger the shrimp, the less likely you are to overcook it. Shrimp spoils quickly so, when possible, you should buy fresh shrimp the same day you plan to cook it

How do I know the shrimp isn’t fishy?

If you aren’t sure your shrimp are safe or are worried they may have gone bad, the best way to check is to give it the smell test. Safe shrimp will smell like saltwater. But, that smell is a light, subtle smell. It shouldn’t smack you in the face. Any shrimp that smells like ammonia (or rotten eggs) is not safe to eat, and you should throw it out.

If your shrimp smells like iodine, that’s OK. Iodine smells kind of like chlorine, but that doesn’t mean your shrimp has been swimming in the pool. That smell is likely from the shrimp's plankton diet. However, the iodine smell poses no risk to you, so those shrimp are safe to use.

Can I use frozen shrimp?

Absolutely! If you’re wondering how to grill frozen shrimp, the answer is: just like fresh shrimp. Simply defrost the shrimp the same day you plan on grilling and use them right away.

How Do I Prep the Shrimp? 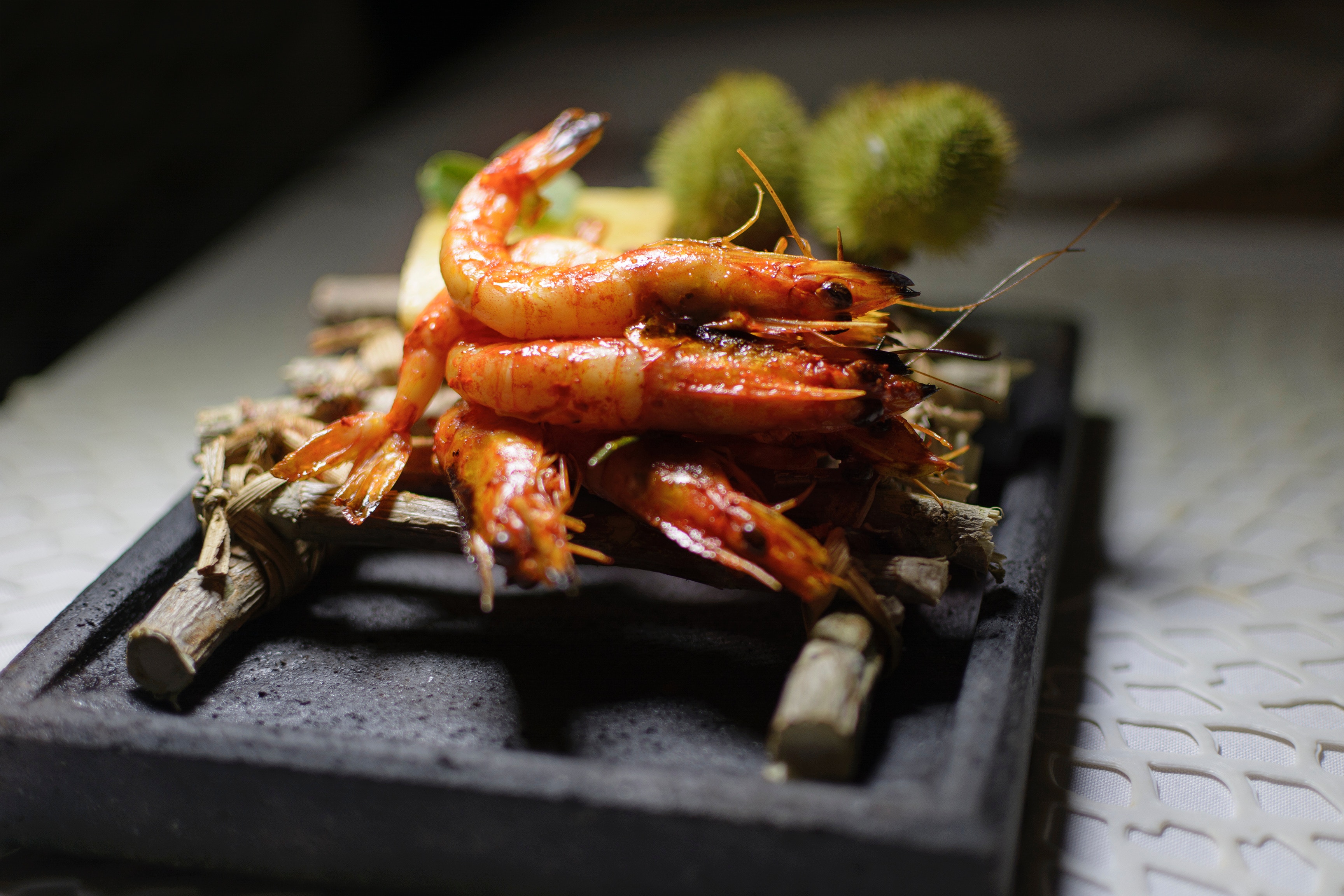 There are a lot of ways to prep your shrimp for the grill. There is no one right way or wrong way. It’s just a matter of personal preference (and maybe what looks pretty).

Should I peel the shrimp?

That’s up to you. While not shelling the shrimp before grilling makes things easier and faster for you, you can’t eat the shell. That means you have to remove the shells while you’re eating them. That could make for a messier shrimp-eating experience.

Some cooks think it’s better to cook the shrimp in the shell. It protects the shrimp from the direct flame of the grill, making the shrimp less likely to dry out. However, some people prefer the “grill” taste right on the shrimp, and you can’t get that if you grill the shrimp with the shell still attached.

Do I have to devein the shrimp?

Choosing whether or not to devein the shrimp is really about looks. Some people do not like the way it looks, and some people don’t care how the shrimp look. Eating the shrimp’s vein is not dangerous, so you can safely leave it in and eat it if you choose. If you leave the shell on the shrimp, there is no way to remove the vein. An alternative to removing the vein yourself is to buy shrimp that is already deveined. You’ll likely pay more for it, but it may be worth it to you.

To brine or not to brine

Just like the brining debate, whether or not to marinade your shrimp before grilling is another hot topic of debate. Purists say that you should not bother with a marinade. The whole point of grilling is to taste the natural shrimp flavor and the taste of the grill on the shrimp. However, those in favor of marinating say that it is the marinade that enhances the shrimp flavor and that the right marinade will compliment the shrimp and grill flavor.

As a compromise, you could marinate some shrimp and not others. Or, try serving some dipping sauces instead of, or in addition to, marinating and brining your shrimp. 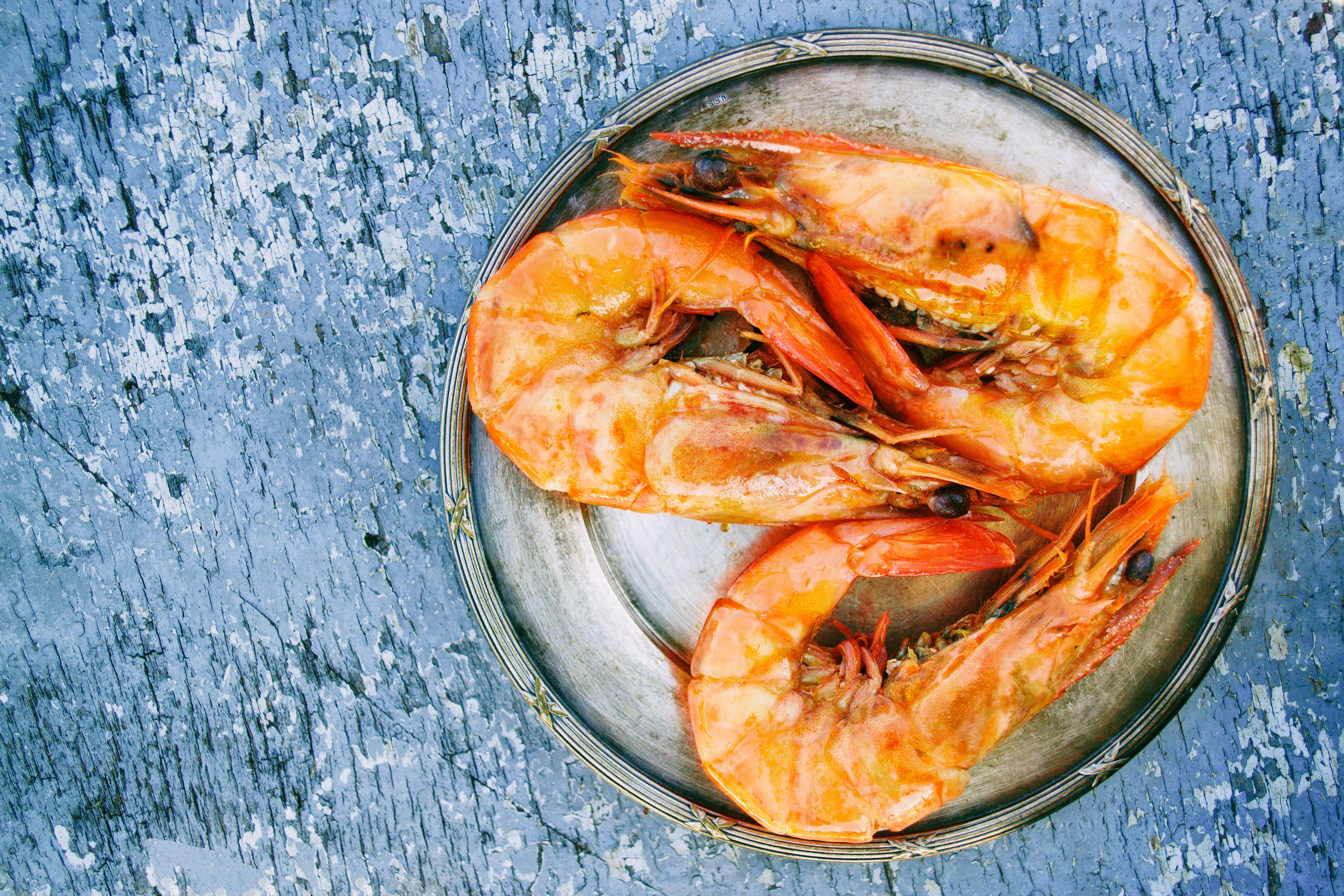 As you’ll see, there is more than one way to grill a shrimp. However, most grilling aficionados say that skewering your shrimp is the best answer to the how to grill shrimp question. No matter what skewering method you choose, make sure you leave some space between each shrimp. If you crowd them all onto one skewer, they may not cook evenly. Also, it’s best to cook shrimp on their own skewer because they cook faster than other meats as well as vegetables.

If you’re using a wooden skewer, make sure you soak your skewer in water before you thread the shrimp. That will help keep the ends from burning and reduces the chance of splinters ending up in your food or your finger.

If you’re using metal skewers, spray them with some cooking spray (or give them a quick dip in oil) first. That helps make sure that the cooked shrimp don’t stick to the skewer.

If you have colossal size shrimp, you might find it easiest to skewer the shrimp in the middle. You can go lengthwise or crosswise. No matter what size shrimp you use, make sure you skewer in the middle of the meatiest part of the shrimp.

You can skewer the shrimp through the top and the bottom (the “head” and the tail). That allows you to create the curved look that you are probably associate with shrimp.

Twice as nice, AKA the double skewer technique

Because shrimp are small and somewhat delicate, consider double skewering them to make sure nothing falls off on the grill. Usually, this is done by skewering the head and tail with one skewer, then again in the same direction with a second skewer. This skewering technique works better with thin skewers and larger shrimp.

Can I Substitute Precooked Shrimp for Fresh? 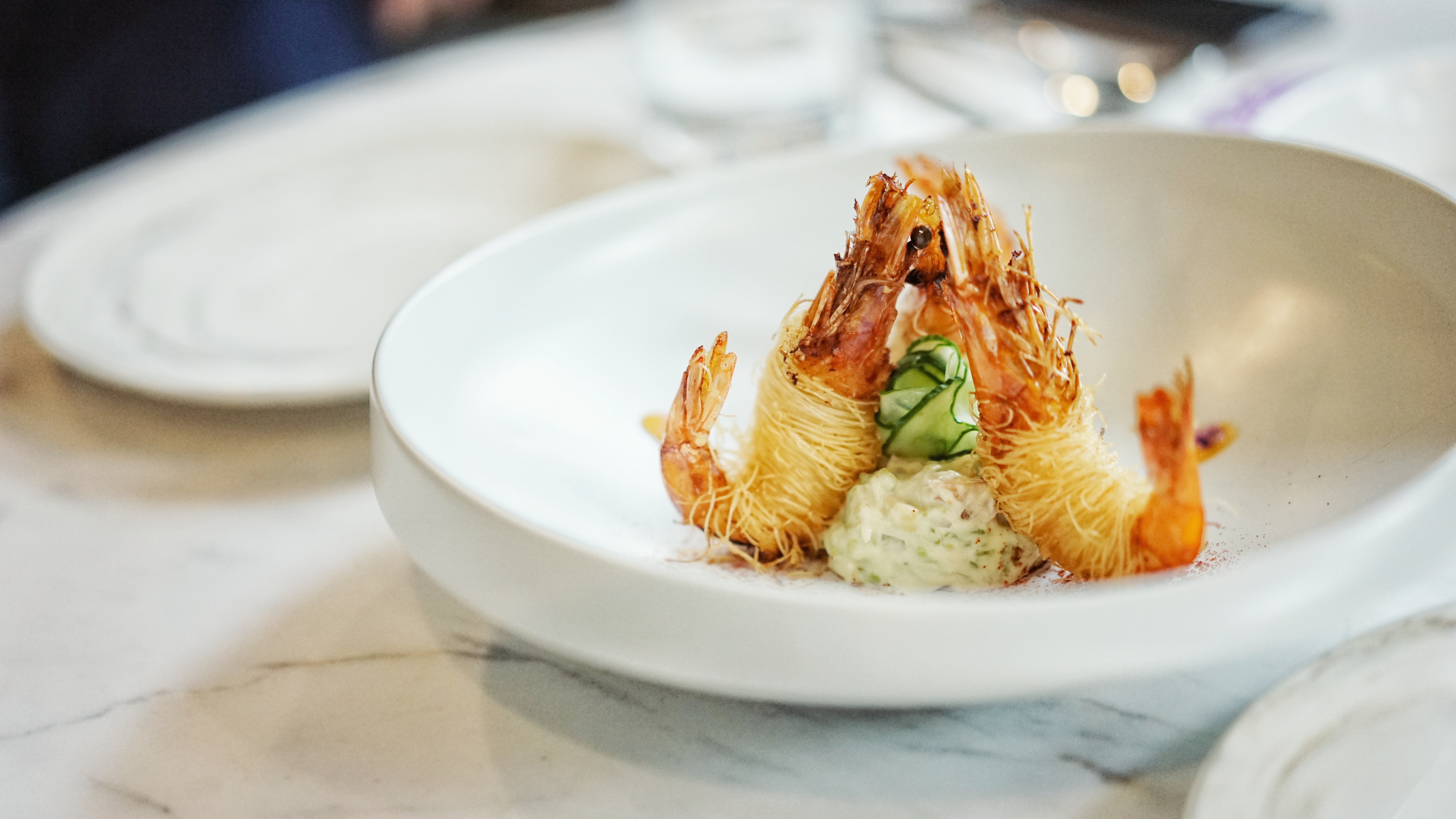 If you don’t want the hassle of preparing fresh shrimp, you can use precooked shrimp instead. You won’t have to do any of the prep work. However, you probably won’t brine or marinade precooked shrimp. But, you can still serve dipping sauces on the side.

How to Grill Shrimp That Tastes Great 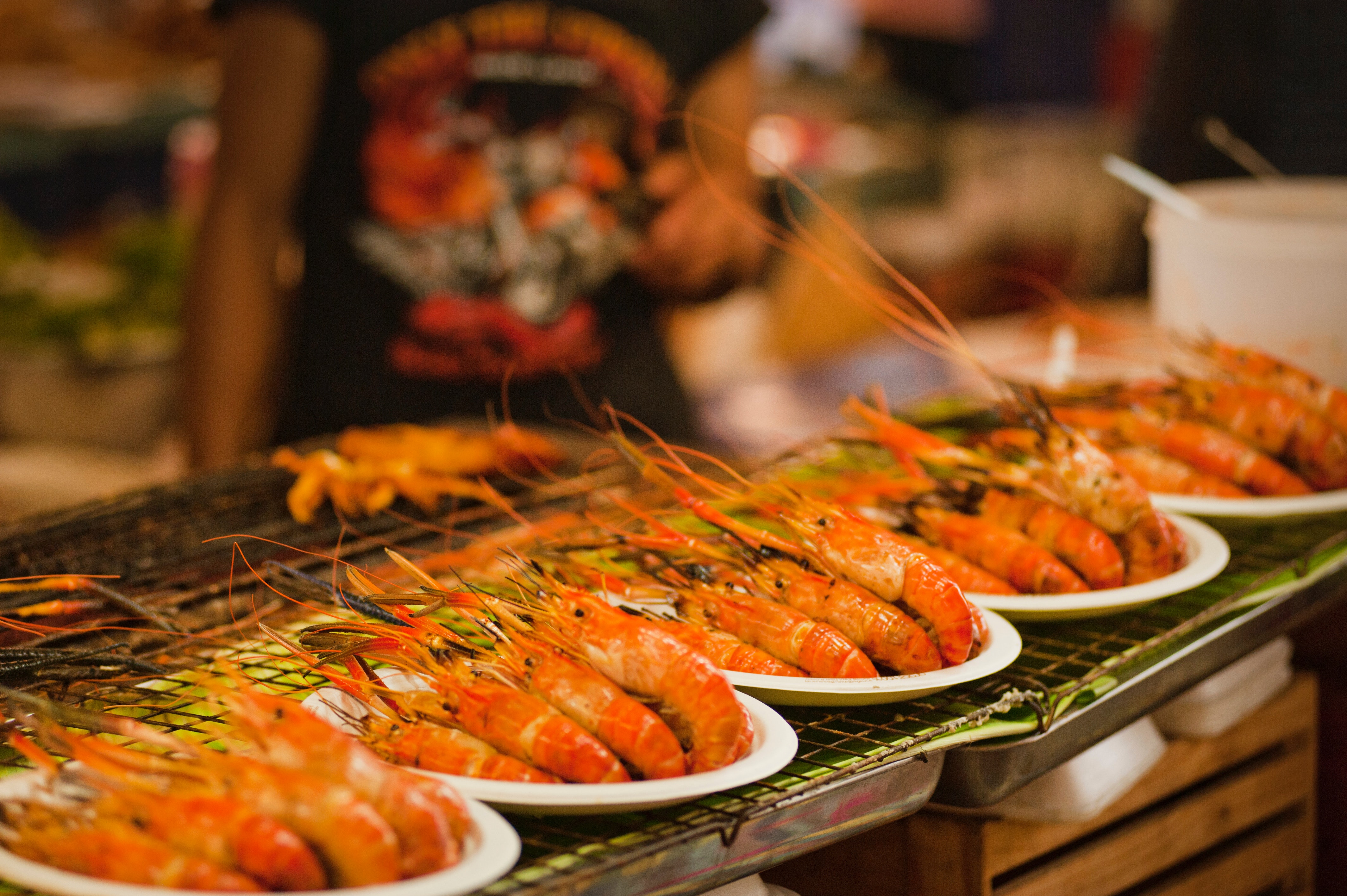 Now that you have prepped your shrimp and ready, it’s time to get into the details of how to grill shrimp. Because shrimp cook quickly, they’re probably the last thing that goes on the grill. As a result, you’ll want to make sure that the heat isn’t too high when you start grilling the shrimp. If you use too high a heat, you’ll overcook your shrimp, and they’ll be rubbery and chewy. Try to get your grill to medium heat. To test if your grill is at medium heat, hold your hand over the grate -- seriously. If you can do that for four seconds, the grill is at the right heat.

Set the shrimp down directly on the grate. Just like the skewers, you don’t want to crowd the cooking grates. Shrimp can grill in as quickly as five minutes, so part of the answer to how to grill shrimp properly is to keep an eye on them. When they're not grey, they're done. Fully cooked shrimp should have a pinkish color, and they will look opaque (as opposed to translucent when they are raw). If you can, flip the shrimp halfway through the cooking time.

Now, you might be wondering how to grill shrimp that is precooked. It’s pretty much the same as raw shrimp. Start by skewering the shrimp like you would fresh shrimp. Then, throw them on the grill for about 30 seconds. That will heat the shrimp and give them a grilled taste, without all the extra work. Make sure you get them on and off quickly, though. Too long on the grill and they will come out rubbery.

Grilling a shrimp on a skewer is only one answer to the how to grill shrimp conundrum. There are other ways to grill shrimp that don’t involve skewering them. That doesn’t mean you can get out of prepping the shrimp, though, unless you choose precooked shrimp.

In a foil packet

If you want the grilled taste without all the work, trying grilling your shrimp in a foil packet. While it won’t taste the same as grilling it directly over the grill flames or heat, this is a close second.

Prep the shrimp as outlined above. Place the shrimp in the middle of a sheet of aluminum foil. Add some olive oil or butter (or use cooking spray) to keep the shrimp from sticking to the foil. Grab the opposite sides of the foil and crimp together, folding the crimp down (rolling it over on itself). Do the same with the open ends toward the middle of the packet. Don’t roll too tightly. If you do, the pressure from the steam that forms inside the packet may cause it to explode.

Place the packets in the center of the grill. This time, the heat can be high (since you aren’t directly grilling the shrimp). Let the packets sit on the grill for about five minutes. Do not flip the packets. They will leak into the bottom of your grill. After five minutes, carefully remove the packets from the grill then cut a hole into the packet to let the steam escape for two minutes. Then enjoy!

This method works best with large (like colossal) size shrimp. You can place large shrimp directly on the grill grates without skewers. Make sure the shrimp have some kind of oil on them, so they don’t stick to the grates. And, don’t try this with small size shrimp as they will fall through the grates as they cook.

In a special grilling basket

If you don’t want to take your chances grilling directly on the grill, you can use a special grilling basket. These baskets (sometimes called grilling woks) are designed to go directly on the grill grates so you can get that grilled taste, without worrying that your food will fall in. The holes are large enough to let the grill taste come through but small enough so that your food will stay put.

As you can see, learning how to grill shrimp isn’t as complicated as it seems. The hardest part is prepping the shrimp (especially if you are doing the shelling and deveining yourself). After you’ve spent some time prepping the shrimp, grilling shrimp is as simple as tossing them on the grill for a few minutes then enjoying. Next thing you know, people will be coming to your house regularly for your famous grilled shrimp.