Welcome! This article will cover a review of not only the Char Broil K6B six burner grill, but also the four burner and three burner version. In the following sections, you can expect to find information on various aspects of each one, such as functionality, ease of use, and any problems that might arise from using them (if there are any problems). 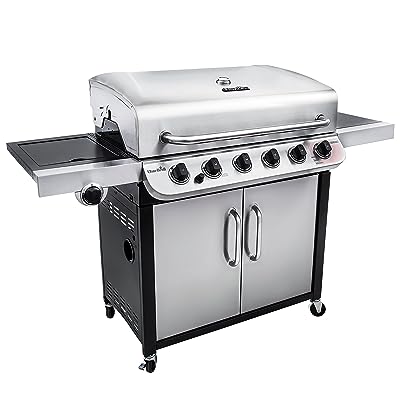 As suggested by the title of this section, this grill does in fact have a total of six burners that make it really easy to cook a large amount of food quickly for a large amount of people. This kind of grill would be perfect for anyone who likes to host regular parties for a large number of friends of family members. That being said, you could cook up your entire holiday meal on this grill in a single round of cooking.

However, if you don’t need the extra space, you can always go with the four burner or three burner option. The fewer burners you have, the cheaper the product will usually be. Therefore, going smaller will undoubtedly save you some money.

This grill has a sturdy, stainless steel coating that is the kind of stuff you want to look for when choosing a grill. The only thing better for a grill in my opinion is iron. Iron is extremely long lasting and durable, however it is not often used in large amounts due to the fact that it is very heavy. You may often see iron grates in gas powered grills or even porcelain coated iron grates. Porcelain coated cast iron provides a great, even cooking for most types of food and is sure to make your life easier. Of course, you have to pay a little more to get porcelain coated cast iron grates.

If you feel like you are going to need some help setting this grill up, then please have someone assist you. If you are in need of help but don’t have any available, then you can opt to buy an “expert assembly” to get started. Keep in mind that this service might change and may not be available in all areas.

In addition to the six burners that put out a total of 60K BTUs, there is a side burner that is useful for either keeping food warm or cooking something small on the side. Of course, you could also opt to use it as a table to hold a few things while you’re cooking with the main burners. There are six total knobs that are located on the front of the grill that allow you to control each burner independently from the rest of the burners. Plus, the burner that is located on the side of the grill has its own burner.

This grill has a large cabinet located underneath the grill that will let you store anything you might need or want to use with your grill all in one place. Having a grill cabinet is useful as it keeps you from losing parts of the grill that you don’t always use. The doors are light and are easy to open and won’t slam themselves shut like a lot of cheaper doors.

If you plan on keeping the grill outdoors, then you might benefit from buying the cover that comes with the grill. This cover can protect your grill to a degree from sunlight, rain, and mild weather conditions. Personally, I think if you really want to protect your grill, you should consider keeping it inside if at all possible (after you’re done using it). Storing the grill inside will help make it last for a longer period of time. Harsh weather conditions can be bad for not only a grill, but for many different types of machinery, especially those with electronic parts and components.

Lastly, the grease pan is removable. It is recommended that you clean out the grease pan after each use and that you properly dispose of the grease before you start another cooking session. Removable grease trays are a great addition to any grill and are sure to make things easier and less messy. 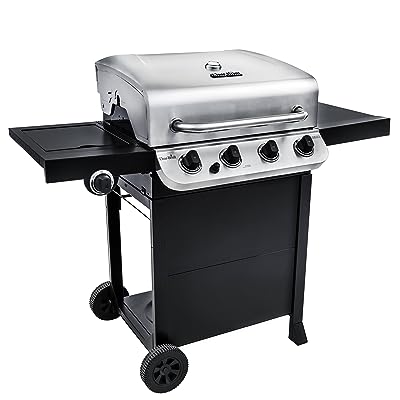 If you’re looking for something just a little bit smaller, then take a look at this four burner Char Broil grill. Given that it only has four burners as opposed to having six burners, it costs less than the previous grill. Going to a smaller size isn’t necessarily a downgrade. If you don’t plan on having large amounts of people over regularly then it is a good idea to get something smaller, like this. The Char Broil 475 4 burner gas grill is just as powerful as the 6 burner version, but with less BTUs due to the decreased amount of burners.

There are four different knobs that control each main burner individually, plus this one also features a side burner. There are two large shelves on either side of the grill which will allow you to put things down without having to buy an additional table. There are two wheels on the left side of the base of the grill that make it easy to roll it along your driveway or along other smooth surfaces. Keep in mind that it is probably not a good idea to roll the grill’s wheels along a rough surface or a steep hill. Rough and rocky surfaces are best handled with rubber tires. These tires are unfortunately made of plastic, but they’re suitable for most surfaces.

As with the other model, this one also has the option of being assembled by an expert. Of course, you are going to need to check on where this service is available first. It may not be available in your area, so be sure to check on that if you know you’re going to need some help putting it together.

Finally, most of the grill’s parts and components are comprised of stainless steel; stainless steel is a great material to use for grills as it lasts for a long time and doesn’t stain or rust. The knobs are made of hard plastic and the grates are iron.

If you don’t know much about what kind of grate you want, then read this section. There are essentially two types of grates that you see most often: stainless steel and cast iron. Stainless steel grates are light and do not stain or rust, but they also do not conduct heat as well as cast iron grates. Cast iron grates (especially those coated with porcelain) are much better and heating and searing food. The downside is that cast iron products are heavy and can also be harder to clean. If you have cast iron bars that are not treated with porcelain, then you have to make sure that you wipe all of the moisture and excess water from them after you use them, or they will rust and lose some of their effectiveness. 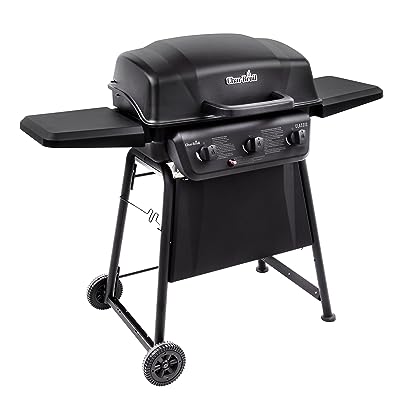 This is the final grill on the list, the Char Broil 3 burner grill. This one is the smallest of the three models, and tends to also be the cheapest. If you only plan on cooking for yourself or for you and your partner, then this would be a great size for you.

You have the option of getting the grill either with or without the side burner. Of course, if you opt to go without it, then you won’t have to spend as much money, plus you’ll have a lot more shelf space.

Remember that there are a lot of accessories that you might find useful, such as a thermometer and a grill brush. These additions can be useful, but its your choice what you choose to use ultimately.

Thanks for stopping by! I hope I helped you find what you were looking for in this Char Broil K6B Six Burner Grill Review.