How to Smoke Fresh Ham

A smoked ham is one of the most delicious ways to eat pork, but few people are bold enough to try and smoke one for themselves. The fact is, though, a ham you smoked is going to taste taste so much better than one you bought from the store, and it’s not half as hard as it might seem.

We’re going to teach you everything you need to now on how to smoke fresh ham, outlining what you’ll need, the process of cooking, and even what you can do with the ham once it’s cooked. So if you’ve ever wanted to learn how to smoke a ham but never knew where to start, this might just be what you’ve been looking for.

Where is Ham Located?

Ham is actually a type of pork, which can come as fresh, smoked or cured ham. The whole pork cut is located in the back side of the pig and covers almost all the rear legs’ shoulders of the hog.

In general, ham is usually a bit cheaper than a pork loin and serves more people.

What is the Best Ham for Smoking?

While you can find already smoked hams in every market near you, when you smoke it by yourself, it is more delicious and tasty.

The ham comes as smoked, cured or both. You need to pick the best ham type for smoking in order to get the most our of it.

When learning how to smoke a ham, you learn quickly that deciding to smoke a fresh ham as opposed to a cured ham is going to greatly impact the flavor of your meat. While cured ham is preserved and made safe to eat through the application of salt, fresh ham is more akin to a roasted or baked piece of pork. As a result, it does not have the distinctively salty flavor most associate with ham.

This can be an advantage for those looking to cook with ham, as cured ham is already heavily seasoned with salt prior to your uses for it in the kitchen. Fresh ham allows you to more easily season the meat to your taste and adjust the flavor as needed, something that is much harder to do with cured ham.

Tips to Have in Mind When Picking Your Ham Cut

What is The Best Way to Cook a Ham?

There are a couple of ways/methods to cook ham, based on its shape/form:

After you created an idea about what is the best way to cook ham based on its shape/cut, now let’s jump into the seasoning and smoking process of it.

How to Season Ham

Smoked meat is only as good as what it’s flavored with. To do the job right, you’ll need to start with a spice rub. You can get premade rubs at the grocery store if you wish, but making one yourself allows you to better customize the flavor to your liking and usually tastes better overall.

For a good spice rub recipe, you can try this:

Note: Additionally, when using this rub, make sure to apply a coating of yellow mustard to the outside of the ham. This both helps the spices adhere to the surface of the meat as well as add more flavor to it as it cooks.

Once you’ve decided to smoke, you’ll have to assemble a short list of ingredients and tools. These are all fairly standard and easy to find, including the ham, so it shouldn’t be much of an issue to get everything together. These supplies are:

When you’ve gotten your dry rub together and set up your smoker, you can start cooking.

What Kind of Wood Can I Smoke Ham With?

Well, different woods will taste different. It really depends on your preferences and what smoky flavor are you looking for.

I personally have tried pecan and hickory. Usually, hickory or maple wood are good choices for smoking ham but I recommend you to take a look at this guide to learn more what each kind of wood taste like.

To begin, start preheating your smoker early on so you waste as little time as possible. Smoking takes quite a while to finish, so the better you use your time, the quicker you get to eat.

Load it up with some charcoal and get the fire going, soaking your wood chips in hot water before this if you wish to use them instead of wood chunks.

Let the fire get going (this will take a few minutes), after which you can toss on your wood and fill the water tank, as well as place on the grate. Close the lid to let the steam and smoke build up inside the barbecue.

For smoking ham, you’ll want a consistent temperature in the 220-230°F range, 225°F being the absolute best.

Step 2: How to Prepare the Ham 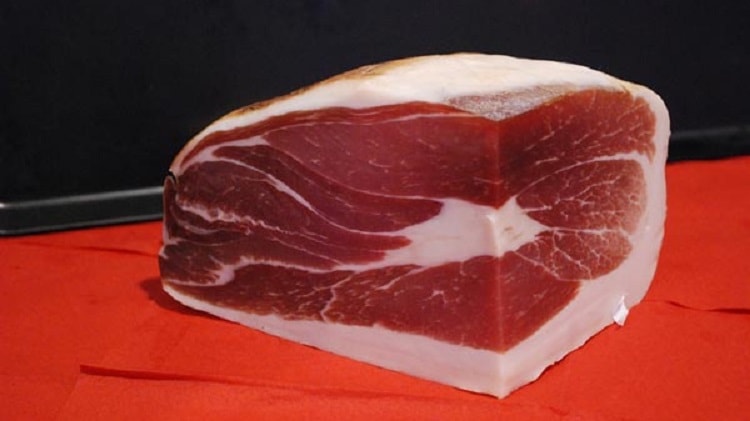 After getting your smoker preheating, use your time wisely by preparing your ham for smoking. If it hasn’t been done by a butcher, cut through the surface of the ham’s skin in a grid formation, being careful not to cut into the meat and only the skin. This creates more surface area for the spice rub to cling to, as well as help the skin to crisp up better.

Apply a coat of yellow mustard, being sure to get it into the cuts you just made. After that, rub in your spices using as much of the mixture as needed, rubbing it all over the ham to insure total coverage. Press them in for good measure, then head outside to start cooking.

With your ham fully seasoned, place it on the grates and close the lid of the smoker. Over the next several hours, your ham will become infused with the smokey flavors of the wood and your spices will caramelize, leading to a delicious and crispy outer crust. Make sure to monitor the amount of wood, charcoal, and water during the smoke, adding more as needed and adjusting air intake to keep the flames at a consistent temper.

Smoking the ham will take somewhere between five and seven hours before it is finally ready to eat. Every hour or so during the cooking process, open up the smoker and spray the ham down with apple juice or apple cider. This helps to keep the ham moist, prevents the outside from charring too heavily, and adds a little extra flavor. 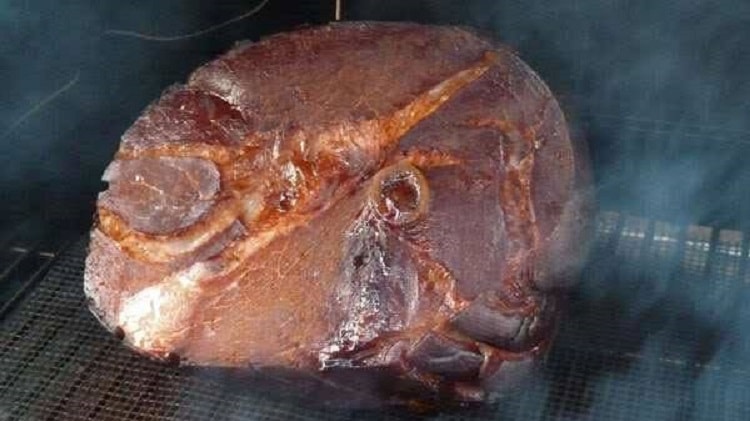 When your ham hits an internal temperature of 160°F, briefly remove it from the smoker and wrap it loosely in aluminum foil. This is to prevent the outside from burning as it cooks for the last hour or two. Once returned to the grill, you no longer need to baste the meat and can just let it smoke, checking for temperature until it reaches 190 degrees.

While optional, one last thing you can do before the ham is ready to eat is spread on a brown sugar glaze (just brown sugar, salt, pepper, and water in a thin syrup) to the outside of the ham after it reaches 190 degrees. Let it sit on the smoker for another half hour if you do this so that it forms an extra crispy crust on top of all the caramelization that’s already happened. After that, you can take it off.

Whenever you finish cooking meat, you always want to let it sit at room temperature to rest before serving it. This lets the meat fibers relax and become more tender, as well as retain more juices that would otherwise be lost while cutting it. It also lets meat stop cooking as the residual heat within it distributes evenly, though hams are fully cooked even before smoking, so this is less of an issue here. For a large ham like this, you’ll want to rest it for half an hour to a full hour before digging in. 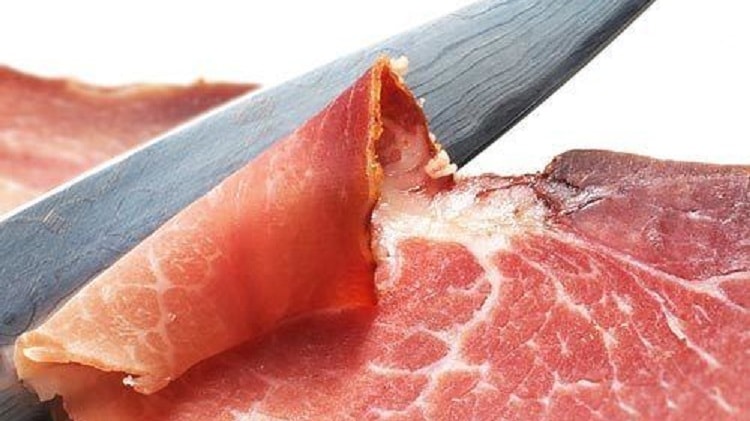 Now you have all the information you need on how to smoke fresh ham, giving you the skill to make a delicious barbecue dinner for friends and family.

Plate up a slice or two (or three or four) next to some macaroni and cheese, mashed potatoes, or fresh roasted vegetables and you’ll have one of the most amazing meals of your life, all made with your very own hands.

Can you smoke a ham that is already fully cooked?

Yes, you can. But, it is not recommended because there is a very high possibility of ruining your ham by destroying the flavor and drying out completely.

How long should I smoke a ham?

The recommended smoking time for ham is about 5-7 hours at a smoking temperature of 220-230°F. You need to check the ham every couple of hours and spray some apple juice or cider on it.

What is the recommended internal temperature for smoked ham?

Your smoked ham should be ready when it reaches an internal temperature of 160-170°F.

It is okay if the temp is actually slightly below that as the meat will continue to cook by itself for a few minutes after you turn off the smoker.

Should I brine ham before smoking it?

Brining is actually optional. Some people like to brine the ham before smoking, some other don’t. Brining your cut will make it even juicer and tastier as brine plays an important role in retaining moisture as the meat cooks.

Should I use aluminum foil to smoke a ham?

You don’t need to use aluminum foil to smoke a ham. Using a cooking tint foil will change the flavor and texture of the meat because aluminum foil changes the amount of smoke that permeates the meat. Using tint foil, will result in a less smoked flavor ham but actually a bit more moist. As I mentioned in the smoking part of this article, you can use tint foil to wrap the ham during the last hour of cooking for it to become a bit more juicer and retain the moisture better.